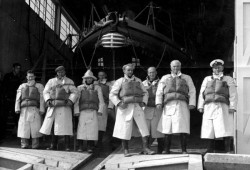 The Selsey Photo Archive Project is a community driven project put together by the Manhood Wildlife & Heritage Group. The project was created using funding provided by the National Lottery Heritage Fund, and supported by Selsey Town Council.

It's aim is to make images of the town’s past available to a wide audience and encourage people to celebrate and engage with Selsey’s unique history.

Sea defences have been required in the Manhood Peninsula for many years. A great deal of work was needed following a particularly bad storm in December 1951 which wrecked houses along the Selsey sea front, and led to their subsequent demolition.  Following is a gallery of images courtesy of Royal Haskoning, the Coastal Engineering Consultant for Chichester District, showing the coastline and sea defences evolve... Read More»