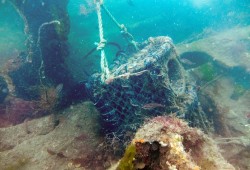 The fishing grounds near Selsey Bill, West Sussex, have traditionally been well managed and productive. Fishing in the area has been dated back to the Bronze Age, while individual fishing families can trace their roots back to the 1750's, 1600's and for one family, over 1000 years.  However huge changes in the fishing grounds have been seen in recent years. Local fishermen feel there has been more change in the last 10 years than in the previous 100 years. Something has affected the marine environment but it isn't clear what that is. However a number of factors are likely to be involved including human inputs and climate change.

Many local fishermen are traditionally potters whose main catch is comprised of crab and lobster, while other species includes fin fish, whelks and cuttlefish according to season. The Selsey fishery in particular was first recorded by Bede in 730AD and is of huge cultural significance locally.

Key observations by fishermen show that crab and lobster catches on the Manhood Peninsula coast have been greatly reduced recently, particularly lobster, while the amount of sediment on the seabed and rocks locally has increased.

Crabs and lobsters have a wide role to play economically and environmentally. They are ecosystem engineers, increasing biodiversity and plankton production in the ocean and helping to lock in atmospheric greenhouse gases and carbon.

Their role in creating a resilient local economy is twofold, on one hand crabs and lobsters are a primary harvest for the fishery and bring in large returns considering the small size of the industry. On the other they help make the fishery a unique selling point for the visitor economy throughout the peninsula.

In both respects the sea surrounding the peninsula and those who use it, such the fishery and the plants and animals that should thrive in it, feature in the blue carbon economy whose significance is increasingly being recognised.

The fishing grounds have changed. A good understanding of the nearshore area and associated water column is needed to understand what the changes are, why they happened, and whether mitigation measures are possible. Partnerships between the fishing industry, academic institutions, local authorities, government agencies, special interest groups and NGOs are essential in order to explore the issues.

Should pollutants be identified as an issue there may be implications for water quality, the visitor economy and the wider community to consider.

The first CHASM meeting was initiated in January 2020 by Chichester District Council to discuss what a project investigating the issues raised by local fishermen could look like. Participants were asked to consider how to shed light on the sedimentation and fishery problems and to recommend next steps. Key partners are Chichester District Council, University of Brighton and Channel Coast Observatory. The CHASM Project Summary  looks at the questions behind the project and provides an overview of CHASM to date.

The CHASM project has produced a report on the first year of activities in which a review was undertaken of existing work that could be affecting crabs, lobsters and other marine species. It doesn't aim to answer all the questions, but it has helped the group see what has happened previously and shown the way forward for future research.  Please see the section below to read and download the CHASM Project Report 2020-2021.

The CHASM Project Area covers the inshore fishing ground of the Manhood Peninsula. The main project area is very close to shore where reductions in crab and lobster catch, and other environmental changes in the marine environment  have been noted. The wider area is where sediment sampling has taken place, and where other factors affecting catch are likely... Continue Reading »

Since early 2020 the first stages of a project concentrating on lobsters and sediment has been taking place in the seas surrounding the Manhood Peninsula south of Chichester, West Sussex. This is the CHASM Project (CHASM | Manhood Peninsula Partnership). The acronym stands for Crustaceans, Habitat And Sediment Movement. The project began following Sea’s the Day (Sea’s the... Continue Reading »

CHASM has been working with the Environment Agency to measure water quality parameters in Bracklesham Bay, West Sussex so we can look at some of the environmental factors that might be affecting crabs and lobsters in the area. Recently they deployed a real-time water quality monitor on the West Pole Beacon just outside the entrance to Chichester Harbour. he... Continue Reading »