Manhood Peninsula Partnership > Projects > Sea’s the Day « you are here 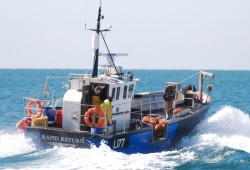 The ‘Sea’s the Day’ project aimed to raise the profile of Selsey’s fishing industry in a historical context, but also to emphasise pressures on the current fishing industry from a changing economic scene and a changing climate. The project took place thanks to a National Lottery Heritage Fund (yes, HLF has changed its name) grant of £35,800. Selsey Town Council successfully bid for the money for its Sea’s The Day project with support from the Selsey fishery, Chichester District Council and the Manhood Peninsula Partnership to help secure the grant. The grant was obtained in June 2018. The official end date for the project is June 2020.

The Selsey fishery in its current form dates to around 1650 though it actually began much earlier. The Venerable Bede recorded the presence of a fishery in the 6th century AD, and other records go back another 200 years. Carbon dating of willow fish traps has pushed this date back even further to the late Bronze Age, and should dates for recently found traps be confirmed this may date fishing activity back to the Middle Bronze Age, in other words a staggering 3,500 years!

The fishing industry predates the town of Selsey, so the history of fishing is also the history of the town making it extremely important from a cultural perspective. The town of Selsey used to be a few miles north of its current location, but migrated south over time because the fishing industry employed most of the population and was therefore central to the existence of the town.

However, the community link between the Selsey fishery and the town of Selsey is greatly reduced nowadays. With social change and an increased ability to travel, there are now many work opportunities other than fishing, most of which are outside Selsey, meaning the fishery is now less connected to many of the local townsfolk. Relatively new arrivals are often unaware of the long tradition dating back to the 4th century AD, and as a consequence do not attach the same social and economic value to the fishery that it once had.

On a positive note the fishing industry is still very important to local residents, both old and new, who have a strong maritime connection. This is particularly so for those involved with the Selsey lifeboat, marine safety and sailing. Fishermen are strongly associated with the lifeboat, and the recent replacement of the Selsey lifeboat station is a reminder that the maritime scene in Selsey is changing.

Sea’s the Day has captured the stories and memories from the Selsey fishing beach told by the fishermen and their families to make sure we don't forget the fishing heritage of Selsey, which will also help ensure it has a future.

On the way we also put together a short film, and made recipe cards using locally caught fish, crab and lobster to bring local food and ideas on how to prepare it, into your own kitchen. The Selsey Fishery advised the project on what would work and who to approach. This is what we did:

The result of all this activity was a fifteen month long exhibition in Chichester’s Novium Museum that started on Saturday 15 June 2019 and ran until September 2020. West Sussex Record Office holds the oral history and other records on a permanent basis now the project has ended.

It is difficult to estimate how many people the story of Sea’s the Day reached but it was at least 98,669 people. This is comprised of:

Novium – 30,000 footfall average for the period the museum was open before lockdown

These figures don’t include the number of people who read Fishing News, West Sussex Gazette, Littlehampton Gazette or Chichester Observer; who follow Love British Food; who have seen Selsey Town Council and CDC’s webpages; who receive the Manhood Wildlife & Heritage Group magazine; who watch Meridian Television or who listen to Spirit FM. This has been phenomenal coverage in terms of raising awareness, and it is hoped that future projects to support the fishing industry can take advantage of it.

And just to remind ourselves what Sea’s the Day is about, let's watch the film:

The legacy of the project as seen from early 2021 is that one fisherman has forged links with O'Hagans, a well respected supplier of local sausages. Another, the last fisherman in Selsey making willow lobster pots in the traditional way, was filmed making pots by the Novium Museum and Destination Selsey, and now has a huge number of new orders. The final part is the CHASM project. This was started in response to questions raised by fishermen concerned with the decline in lobster/crab catch seen locally and the increase in sediment. Channel Coast Observatory, Brighton University, Mulberry Divers, Southsea SAC and Seasearch are among those closely involved with trying to identify causes so wathc this space!

For more about the various parts of the project see the boxes at the foot of this page.

The Recipe cards were the first part of the project to be completed and have been hugely successful. The aim was to take local catch and show you wonderful recipes giving you ideas about how to cook it in your own kitchen.  Many restaurants across the Manhood Peninsula take pride in serving local produce, particularly seafood, and kindly agreed to... Continue Reading »

The book for the Sea's the Day project is called Bringing Home the Catch. The book was written by Janet McMeekin whose light, conversational style of writing made her the perfect choice to communicate the stories of the Selsey fishermen. The book used stories from the oral history archive and the author took great pains to speak to each... Continue Reading »

The banners are used at exhibitions and in foyers, or in any location not suitable for the film. The project was extremely fortunate to meet Graham Murrell, a Selsey resident but also former head of photography at Central St Martin's School of Art, London. Graham kindly brought out his Hasselblad camera and took portrait photographs of a number of the... Continue Reading »

The oral history component of Sea's the Day is the backbone of the project and underpins everything else except for the recipe cards.  A number of Selsey people volunteered their time for training and to undertake just over 30 interviews. These took place in fishermen's huts, in living rooms, and sometimes in council offices. As topics emerged we also... Continue Reading »

Sea's the Day: The Fishermen of Selsey Bill. The film is one of the high points of the project. Millstream Productions did a wonderful job as they worked with the project team to sift through the oral history interviews to identify likely candidates to sit in front of a camera. This was followed by filmed interviews at locations on... Continue Reading »

The Novium is Chichester District's main museum that places a strong emphasis on local history while making it fun and interesting. The Novium has given Sea's the Day space to show off the project until September 2020. A large graphic panel summarises the project, and there is space to watch the film, listen to the oral history interviews, read... Continue Reading »