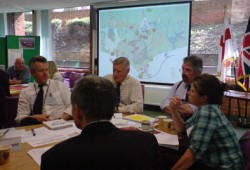 The Towards ICZM Workshop held on 6th April 2011 run by CoastNet, one of the partner organisations on the Chichester Coastal Change Pathfinder Project, was an effective vehicle for exploring issues on the Manhood Peninsula . Approximately 55 people with a variety of backgrounds and interests attended. Among them were representatives from Chichester District Council; local parish councils; local natural environment and heritage organizations; businesses; West Sussex County Council; Natural England; RSPB and the Environment Agency.

The Final ICZM Workshop Report can be viewed HERE

The workshop was set in the context of ten years of coastal management on the Manhood Peninsula, and was designed to:

• Evaluate research, ideas and proposals from 10 years of integrated thinking

• Identify which solutions are best delivered by other partners, and how and when the community can contribute.

It was acknowledged there are new approaches on the horizon that will have a significant impact on the planning process. Five key drivers were identified making integrated planning for the Manhood Peninsula a necessity:

Delegates were presented with a number of reasons for considering ICZM now:

• To summarise everything happening on the Manhood Peninsula

• To ensure the best use is made of current scarce resources

• Creating a plan will ensure issues have been considered and prioritised, in preparation for an improving economy.

Delegates were divided into groups addressing the themes of Transport, Environment and Water Management, Economy, Infrastructure, Housing, and Community. They were then asked to review the Threats, Opportunities, and Aspirations affecting each theme using their expertise and experience to inform the outcome. The most important of these from the planning perspective was considered to be the threats, and the groups were also asked to identify the most significant threats and resulting conflicts affecting the theme under discussion by their group.

The discussion then revolved round resolving the conflicts. The general consensus was that spatial planning can be a difficult business, especially in coastal areas like the Manhood Peninsula where there are often multiple competing demands. Furthermore, the impacts of climate change on the coast require long-term thinking and signal the need for significant change in vulnerable areas.