Manhood Peninsula Partnership > About the Area > Sidlesham « you are here 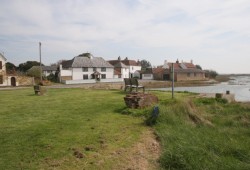 Sidlesham lies to the south of Chichester on the eastern side of the Manhood Peninsula. The whole parish is notably very flat and low-lying containing extensive farmland. It has a significant coastal fringe, which includes part of Pagham Harbour.

One third of Pagham Harbour is within the parish, it is Local Nature Reserve (LNR) now designated a Site of Special Scientific Interest (SSSI), a Special Protection Area (SPA) and a Ramsar Site (international designation of importance).

It is known for its expanse of tidal mudflats which attract thousands of birds throughout the year, including little egrets. Along the coast, shingle ridges provide habitat for rare plants such as the childling pink.

Sidlesham boasts some excellent views of Chichester Cathedral and the South Downs to the north, and to the Solent and the Isle of Wight to the southwest.

The parish has two Conservation Areas; Sidlesham Church around Church Lane and Sidlesham Quay along Mill Lane. Sidlesham is recorded in the Domesday Book and the Normans built part of the present church in 1200AD

On a more recent note, the Selsey Tram carried people between Sidlesham and Chichester from 1897 until closing in 1935, when a causeway was built linking Sidlesham to Selsey at all states of the tide. The Chichester, Sidlesham, Selsey cycle-way will follow part of the tram route alongside the harbour.

To gain a more thorough introduction to this lovely part of the West Sussex please visit the Parish website www.sidlesham.org