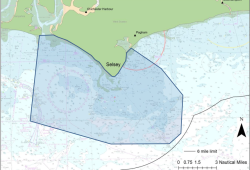 The CHASM Project Area covers the inshore fishing ground of the Manhood Peninsula. The main project area is very close to shore where reductions in crab and lobster catch, and other environmental changes in the marine environment  have been noted. The wider area is where sediment sampling has taken place, and where other factors affecting catch are likely to be located. Changes have also been noted elsewhere along the south east coast, and may reflect a wider issue though it is not clear at this stage what it might be.

Moving from west to east the area of interest extends from the mouth of Chichester Harbour, round Selsey Bill to Pagham Harbour. The southern extent includes the A1 submarine site in Bracklesham Bay; Hounds Reef; the Grounds; the Mixon; Pullar; Looe Channel; the Owers and Eastborough Head.

Sediment samples have been taken from reference sites on the NAB Tower in the south west of the project area, and on the Hooe Bank in the southeast