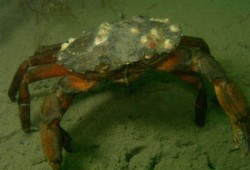 Our local waters throng with marine life. In Chichester Harbour pontoon pilings and mooring chains are covered in a wealth of colourful seaweeds and animals and reefs of native oysters provide a home for bright red sea squirts, hydroids and sponges. The worms, crustaceans and molluscs that provide food for Harbour birds also sustain a rich food chain below the waves. The shallow waters teem with plankton and are an important nursery area for young fish.
The mud of the Harbour floor is quite inhospitable, but pebbles and shells provide a hard surface to which marine plants and animals anchor. There is a very unusual plant that manages to survive in the mud. Eelgrass (Zostera) is not seaweed, but a flowering plant. The patches, or 'beds', are unique in Sussex, and significant nationally, and provide a sheltered nursery for juvenile fish, crabs and other species.

In the muddy seabed, most life is anchored in, burrowing in or crawling around within the sediment. Worms do well here; including the Peacock worms that hide their bodies in tubes made from mud and mucus. Sea squirts are living sieves that form encrusting colonies on pebbles and cobbles, sucking water in, filtering the edible bits and ejecting the water. In shallower areas you will find sponges growing on boulders.

Dahlia, Daisy and Snakelocks anemones are common throughout the Harbour. All anemones have stinging cells for defence and capturing prey. They are carnivorous, feeding on small marine animals such as shrimp, prawns and even small fish.

Slipper limpets were accidentally introduced in the late 19th Century, and have completely altered the seabed habitat, providing hard surfaces to which plants and animals attach. Alien-looking cuttlefish are abundant in the summer months, hunting and nesting among the weeds and eelgrass.

Crabs, like the Spider, Hermit and Shore crabs, are like armour-wearing underwater insects. The Hermit crab does not have its own armour, so it borrows discarded mollusc shells instead. As the crab grows it needs to find a new home and will carry out a thorough inspection before moving in.

A number of Common Seals (Phoca vitulina), also known as harbour seals, live in the Solent and often visit Chichester Harbour or can be seen swimming along the coast. Each one has unique markings and even their colourings can be different, ranging from tan to grey, black or brown. The females are generally smaller but with a longer lifespan. Atlantic Grey seals are also occassionally spotted. This is the only known rookery in the Eastern English Channel and so they are considered regionally unique and therefore very important. The Solent and its harbours provide an ideal habitat for them. Here they are relatively undisturbed and food is plentiful, as they like to tuck into fish and crustaceans. In addition there is plenty of mud and sand for them to rest on. They can be seen anywhere in the harbours and have been known to swim into the marinas and take a nap on the swimming platforms of moored boats!

If you do see one, enjoy it but please keep well away so that you do not cause any disturbance. You can report your sighting on the forum and even include a photo if you are lucky enough to get one.

Try here for more information about the seals of Chichester Harbour