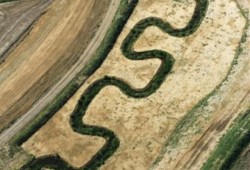 The RSPB's newest nature reserve at Medmerry offers long walks and cycle rides through an amazing new landscape only a stone's throw from Pagham Harbour, with new mudflats, tidal lagoons, saltmarsh, wildlife-friendly farmland, dragonfly-rich ditches and great views and sunsets. Situated on the Manhood Peninsula coast, south of Chichester, this is a ground breaking project and the first of its kind to realign on the open coast, the scale of the realignment is immense - the size of 300 football pitches!
Between 2011-2013, the Environment Agency (EA) constructed 4.25 miles (7 km) of new floodbank inland from the sea between Selsey and Bracklesham, on one of the last undeveloped stretches of coast anywhere between Southampton and Brighton. They then breached the existing shingle beach to create the largest managed realignment scheme on the open coast in Europe, creating amazing new wetland habitats.
The scheme has greatly improve the standard of flood protection for over 300 homes, the water treatment works and the main road into Selsey. It is in the process of creating extensive wetland wildlife habitat designed to compensate for the loss of internationally important habitats elsewhere, and major new off-road sustainable transport routes.

Follow this link for more information about the Medmerry Managed Realignment Scheme.
The clay needed to build Medmerry’s new flood banks was dug from large shallow pits (borrow pits) within the scheme, which provided a wonderful opportunity to look for archaeology. Research is ongoing into the archaeology being discovered on the Medmerry site, and more information can be found in the Archaeology at Medmerry section below.
Medmerry also creates an opportunity for the area to reassert its position as a unique attraction to tourists. An important aim is to extend the visitor season outside the usual summer months, prolonging opportunities for taking part in low-impact activities such as cycling, walking and bird watching. Projects are currently being explored to address the objectives of green tourism and economic development on the Manhood Peninsula. Creating green links around Medmerry and forging links between communities to the east and west of the Manhood Peninsula are the key to the success of the proposals. More information can be found in the Green Links across the Manhood (GLaM) section below.

Medmerry,  the country's first and largest open coast managed re-alignment scheme, is located south of Chichester. The site is managed by the RSPB together with Pagham Harbour, however the scheme itself was built by the Environment Agency as a flood defence work for Selsey and the Manhood peninsula. During the build a great deal of important archaeology was discovered that rewrote... Continue Reading »

A leaflet has been created by the Selsey Cycle Network, which details the circular cycle routes that go around the Manhood Peninsula. The cycle routes are mainly on minor or traffic free roads and provide access to Chichester and Pagham harbours. They will also take you round the edge of the new nature reserve created as part of the... Continue Reading »

The MPP Small Grants Fund is a new fund available to residents and groups across the Manhood Peninsula. Project bids are invited up to a maximum of £3,000 per bid. Grants will forward fund projects, and can be used as match funding to attract grants from other sources.  The fund aims to find applications for one-off projects that support local... Continue Reading »