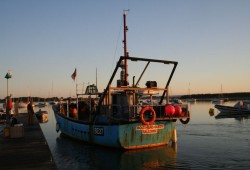 The construction of a small harbour at Selsey is likely to generate economic opportunities for the town bringing benefits to fishing and recreational boat users while protecting the local area from sea flooding during stormy weather. It will build on the traditional small boat fishing industry in Selsey, a core economic activity for many generations of fishermen both here and in other coastal towns whose fleets of small craft typify the south coast of England, and provide a focus for tourism on the Manhood Peninsula. In addition, Chichester District Council’s Economic Development would like to see the fishing industry in Selsey protected and regenerated in a similar manner achieved by ventures in Ventnor and Ryde, Isle of Wight.

A harbour at Selsey will also create a new link between Bognor and Portsmouth by adding to the series of safe harbours in adjacent towns along the south coast, bringing benefits to fishing and recreational boat users. Many other benefits and economic opportunities may also be possible for the Selsey economy including fisheries, and the Manhood Peninsula visitor economy. Visitor safety and coast protection are other important aspects of the project.

However over the course of three years technical and socio-economic studies revealed that although technically feasible, the ongoing economic viability of small harbour at Selsey was as yet unproven. The Selsey Haven project is now on a 'go-slow' while projects to improve the economy and the area are, for the time being, made a priority.

Between 2015 - 2017 three studies were undertaken, the results of which were reported to Chichester District Council and Selsey Town Council in early 2018.

In 2015 a Coastal Communities Team was set up. Funding from Chichester District Council and DCLG was used to produce an introductory document exploring the technical feasibility, costs and implications of a small harbour in Selsey. The study was produced by Royal Haskoning DHV. This is a link to their 2016 report ‘Selsey Harbour Preliminary Consultation Document’ .

During 2017 two further studies were produced. A Technical Key Issues Study was commissioned from Royal Haskoning DHV that included an economic viability assessment by the marine broker and estate agent Vail Williams. A wider Socio-economic Impact Assessment was produced by Marshall Regen, which included a 'Wayfinding Report' by Richard Wolfstrom on the East Beach area and it's links with Selsey High Street. The reports were commissioned in partnership by Chichester District Council, Selsey Town Council and Selsey Fisherman’s Association. Further thought was also given to funding possibilities and opportunities from national, regional and local funding sources. Findings are shown below in the Selsey Haven Funding Research document by Hilary O'Sullivan. These reports can be found in the 2017 Selsey Haven Reports section below.

The next steps involve taking the recommendations from the Marshall Regen and Wolfstrom reports and creating a series of projects to link East Beach with Selsey Town Centre. The aim is to improve East Beach, and demonstrate that this is indeed an area in which a Haven might flourish in future.  These projects will also complement the new 'Selsey Vision' document, an energetic, enthusiastic review of the type of town Selsey would like to become. The 'Vision' is being produced in a collaboration between Selsey Town Council and Chichester District Council.