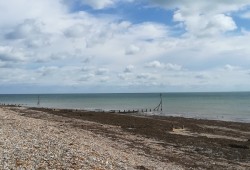 Since early 2020 the first stages of a project concentrating on lobsters and sediment has been taking place in the seas surrounding the Manhood Peninsula south of Chichester, West Sussex. This is the CHASM Project (CHASM | Manhood Peninsula Partnership). The acronym stands for Crustaceans, Habitat And Sediment Movement.

The project began following Sea’s the Day (Sea’s the Day | Manhood Peninsula Partnership), during which questions were raised by the Selsey fishermen with respect to why so few lobsters were being caught locally, and why such a large influx of sediment had arrived in their fishing grounds.

The initial stages were undertaken by Channel Coast Observatory and University of Brighton in partnership with Chichester District Council. The aim was to review existing data in order to establish a baseline indicating knowledge gaps, and in doing so, show the direction of travel necessary for future work. This forms the basis of the first CHASM Report 2020-2021.

The report doesn’t aim to draw conclusions with respect to the definitive reasons behind environmental change and lobster decline - this will be a long road, on which we have only just embarked. It has served to direct our thoughts on next steps however, and there is a whole list of subject areas to be explored from now on that should finally be able to provide an answer.

The project is slowly changing emphasis, and instead of looking only at crabs and lobsters, is beginning to look more closely at the seawater and seabed they inhabit.  In addition, water quality and environmental change are both affected by factors such as climate change and intense urbanisation on the south coast and in temperate zones generally. It is essential to gain knowledge of why lobsters declined, and sediment conditions changed before determining whether it is possible to restore the previous status quo.

One of the main points to emphasise is that this is a review of existing data with, and the analysis of only a very small amount of new sediment data was possible. Covid was not our friend in this respect, but since laboratories reopened analysis work has restarted and will be reported on in due course.

It is hoped that the ongoing research will benefit other projects on the south coast but will also prove an effective model to roll out to other temperate regions.

Key partners in the report are the Manhood Peninsula Partnership, Channel Coast Observatory, University of Brighton, and Chichester District Council. A huge amount of support was received during the period covered by the report from the fishermen of Selsey Bill, and project partners Mulberry-ME, and Southsea SAC to whom huge thanks are due.

The ‘Sea’s the Day’ project aimed to raise the profile of Selsey’s fishing industry in a historical context, but also to emphasise pressures on the current fishing industry from a changing economic scene and a changing climate. The project took place thanks to a National Lottery Heritage Fund (yes, HLF has changed its name) grant of £35,800. Selsey Town... Read More»

Sea's the Day: The Fishermen of Selsey Bill. The film is one of the high points of the project. Millstream Productions did a wonderful job as they worked with the project team to sift through the oral history interviews to identify likely candidates to sit in front of a camera. This was followed by filmed interviews at locations on... Read More»