Manhood Peninsula Partnership > About the Area > Earnley « you are here 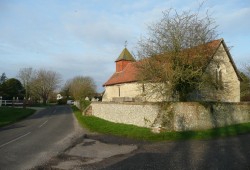 The civil parish of Earnley is three miles long from north to south and a mile and a quarter wide. It boasts a two and a half mile coastline stretching from West Sands, Selsey to Bracklesham.

There is a current population of approximately 450, living mainly in the village of Earnley and the hamlets of Almodington and Somerley.

The name Earnley means ‘eagle clearing’ and first appears in 780, before the current village came into existence. The parish church in the village, which has no patron saint, dates from the 13th century.

The settlement and manor of Somerley (summer clearing) dates from the Anglo-Saxon period and was first mentioned in the Domesday Book in 1086.

Both settlements originated from clearings in the Maene Wudu (woodland held in common), which gave its name to the Hundred of Manhood, whose meeting place and court house were in Somerley.

Most of the non-residential land in the parish in agricultural and horticultural; an RSPB reserve occupies Thorney Marshes at the seaward end of the parish.

Earnley is the Manhood parish principally affected by proposals for managed realignment and breaching of the shingle bank along the coastline.

Earnley’s primary concern is coastal protection and land drainage. A second but no less important concern is the speed, frequency and size of traffic using the rural lanes.