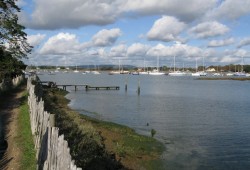 At 74km2, Chichester Harbour is the largest natural estuary in South East England. It is a living, working landscape, where over 10,000 people live. The Harbour straddles the county boundary between West Sussex and Hampshire, and every year, around 1.5 million people visit, whether to sail the waters or walk the network of footpaths.

There are 14 sailing clubs in the Harbour and some 5,200 moorings and berths. At peak time, over 12,000 boats can be found on the water, whether to participate in competitive sporting events or to enjoy recreational cruising.

The Harbour is also a bird watchers paradise, where over 51,000 water fowl feed, rest and breed. Of particular note is the Brent Goose, an iconic migratory bird. During the winter months over 10,000 Brent Geese visit Chichester Harbour constituting 5% of the international population. There is also an established colony of seals, which bask in the sun and swim between Langstone and Chichester Harbours.

The area is recognised for its ecological importance through a number of complementary international, national and local designations. The management of the landscape is guided by a statutory Management Plan (2014-2019), a strategic partnership document encompassing shared approaches to looking after this protected area that are consistent with these designations.

Chichester Harbour is intensively used. Its day-to-day management presents significant challenges for the principal guardian organisation, Chichester Harbour Conservancy, to help look after water safety on the one hand, and nature conservation on the other. Only through integration will a truly joined-up, coherent and sustainable approach be established.

Figure 1. The range of designations that affect the management of Chichester Harbour