Manhood Peninsula Partnership > About the Area « you are here 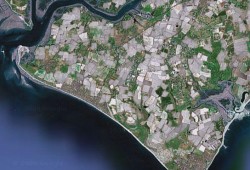 The Manhood Peninsula is a large peninsula of land to the south of Chichester. The name is thought to derive from the Anglo-Saxon maene-wudu meaning ‘common wood’ or 'common land'. Situated on the south coast of England, south of Chichester, it is one of the last relatively undeveloped stretches of coastline between Newhaven and Southampton. Forming part of the coastal plain south of Chichester it is semi-rural, open and flat. The peninsula is bordered by the English Channel on its southern side; Chichester Harbour on the west; Pagham Harbour on the east and Chichester and the South Downs to the north. November 2013 saw the official opening of the Medmerry Managed Realignment Scheme, the largest open coast managed realignment scheme in the UK.

The 300ha Medmerry scheme is Europe's largest open coast managed realignment project.  It is located in the south of England on the Selsey Peninsula and along a wave-exposed stretch of coastline that originally had a mobile shingle bank (with internal revetments) as its primary sea defence.  It also had a large area of low elevation land behind it.  Therefore, past significant flood events had occurred at this site and there was a continuing high risk of serious coastal flooding at this location which needed to be addressed.

The project involved the construction of 7km of new defences up to 2km inland.  Once the new sea walls were constructed the inland area prepared for flooding through the creation of channels.  The original sea wall was then breached (in September 2013) allowing the site to be flooded.  The subsequent area of tidal inundation within the site was 183ha on the larger tides (with around 120ha of islands and surrounding grassland).

The project reduced the risk of flooding for around 300 homes in Selsey, as well as a nearby water treatment works and the main road into Selsey.  It also reduced the requirement for the Environment Agency to undertake regular, costly, maintenance and reshaping work on the shingle ridge after storm events.  In addition, an important new intertidal wildlife habitat and recreational amenity was created.

The improved flood protection (provided by both the new sea wall and the large expanse of new wetland in front of it) was particularly valuable when severe storms hit the UK in the 2013/14 winter shortly after the site was created.  These storms caused a major redistribution and flattening of the shingle bank and serious flooding events would have occurred without the scheme in place. The scheme was constructed by the Environment Agency as part of a Solent wide regional strategy and is now managed by the RSPB.

There are 16 villages and settlements on the Manhood, with populations varying from 165 in Apuldram to more than 10,000 in Selsey. The total population of the Manhood is about 25,000, similar in size to Chichester, its nearest city. Employment is mainly in tourism, agriculture and horticulture, boat building and the service sector (schools/shops).

Medmerry has proved popular with visitors, some of whom have surprised even the RSPB such as the 50 or so 'Gummy Sharks' who paid a visit in 2015:

The history of the Manhood Peninsula and its settlements is long enough to include Early Man and the Romans. The area has been in active use for millennia and can boast walks and cycling, woods and fields. You can go back even further in time by discovering the fossils of Bracklesham Bay. Find out more about the archaeology and history of the... Continue Reading »

From this small parish, rich in history, residents and visitors alike enjoy magnificent views from Dell Quay, once the port for Chichester, out over the waters of the harbour with bobbing boats and abundant wildlife or, by turning north, espy across the rich low-lying farmland the “always present cathedral spire”, according to naturalist W.H. Hudson a century ago, with... Continue Reading »

A small village on the shore of Chichester Harbour and on the western side of the Manhood Peninsula Birdham is mainly known for its two locked marinas. One of these, Birdham Pool is thought to be the oldest marina in the country. The other, Chichester Marina, is one of the largest marinas in the country. Between Birdham Pool and... Continue Reading »

South of Chichester, one enters Stockbridge, the modern residential area of the parish, its name echoing the ancient Hundred with its meeting place by a wooden bridge over a stream, replaced nowadays by church hall, Selsey Tram pub and row of local shops. For residents, employment and major facilities mean travel into the City and to the big coastal... Continue Reading »

The civil parish of Earnley is three miles long from north to south and a mile and a quarter wide. It boasts a two and a half mile coastline stretching from West Sands, Selsey to Bracklesham. There is a current population of approximately 450, living mainly in the village of Earnley and the hamlets of Almodington and Somerley. The... Continue Reading »

East Wittering and Bracklesham are two villages lying adjacent to each other in the attractive coastal setting of Bracklesham Bay. The villages are quietly removed from the hustle and bustle of busier towns, and are known for the fantastic expanses of sandy beach exposed at low tide. These extend along the coast to East Head . Watersports are an excellent... Continue Reading »

Hunston is a small, semi-rural village found in the northern part of the Manhood Peninsula, but still a couple of kilometers (1.5 miles) south of Chichester city centre. There are few houses to be found here allowing a true village atmosphere to be retained. The village is home to Hunston Manor, a moated manor house dating from c1670 parts of... Continue Reading »

The Parish of North Mundham is a largely agricultural and horticultural area south of Chichester. It is comprised of a scatter of small villages and hamlets, namely the three villages of North Mundham, South Mundham and Runcton and the hamlets of Bowley and Fisher. Pagham Rife runs through the village of Runcton and for centuries powered Runcton Mill. The Rife... Continue Reading »

Oving Parish is situated 3 miles east of Chichester and  is made up of  Oving, Shopwyke, Colworth, Drayton, Merston, Maudlin and Elbridge. It is still essentially a rural community although changes are occurring. Some farms are developing and transforming disused outbuildings into business centres. Gravel extraction also takes place, which leads to the creation of lakes. There is a... Continue Reading »

Selsey is a seaside town about seven miles (11 km) south of Chichester and lying at the southernmost point of the Manhood Peninsula. It is bounded to the west by Bracklesham Bay, to the north by Broad Rife (rife being the local word for stream or creek), to the east by Pagham Harbour and terminates in the south... Continue Reading »