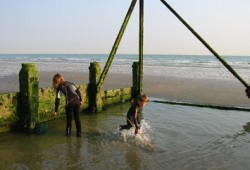 A number of films were produced on behalf of the MPP by CoastNet as part of the Coastal Change Pathfinder Project. Three films were about coastal governance on the Manhood Peninsula, and four short films explored the coast from a young person’s perspective.

The films about coastal governance were developed as a complementary suite of three. They looked at why the Peninsula is such as special place, and at issues such as the possible risks involved when living in a coastal environment. There is a set of Facilitor Notes written to accompany the films, which give a context for the discussions taking place within each film.

1.‘Celebrating the Manhood Peninsula Coastline’. This film focuses on why the Peninsula is special through interviewing local people such as fishermen, RNLI lifeboat crew and residents. The intention is to capture and convey local people’s unique relationship with the coast as a starting point for engagement on more complex issues around coastal change.

2.‘Exploring Coastal Risks & Responsibilities’. This film explores public perception of risk, and aims to raise awareness of the risks of coastal change locally.

3.‘The Challenges of Coastal Decision Making’. A third film was aimed at the public sector and explores consultation and communication between the community and organisations responsible for coastal decision making. This film highlights some of the difficulties of participating in the coastal management process.

The four young people’s films were produced with the close involvement of the young people featured, who became actively involved with writing and directing the films and were happy to give their personal perspectives about life on the Manhood Peninsula.

Catch a Wittering Wave, a film by Henry Wiltshire

Memories of the Coast, a film by Beatrice O’Brien

A View From a Bike, a film by Henry Foster

A Rider’s View, a film by Lily Foster

The Coastal Change Films can be viewed using the following link :

The films can also be viewed on CoastNet's Coastal Literacy Blog, and Chichester District Council's website