Manhood Peninsula Partnership > About the Area > Oving « you are here 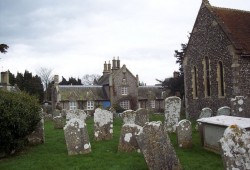 Oving Parish is situated 3 miles east of Chichester and  is made up of  Oving, Shopwyke, Colworth, Drayton, Merston, Maudlin and Elbridge. It is still essentially a rural community although changes are occurring. Some farms are developing and transforming disused outbuildings into business centres. Gravel extraction also takes place, which leads to the creation of lakes. There is a wide range of businesses including garden centres, farm shops, a brewery and nurseries, although there is no longer a grocer or post office in the parish. There are two churches in the parish, St Giles in Merston and St Andrews in Oving, as well as a Kingdom Hall in Shopwyke.

The population of the parish is about a thousand, although Oving village has about 600 residents. The village contains a number of interesting buildings which chart the course of the village’s development through time:

Social life in Oving is thriving, with numerous clubs and societies and many social events throughout the year supported by a parish magazine, Oving Parish News. Summer activities include the annual Oving Scarecrow Day involving the entire village community. Please visit the Oving Scarecrows at www.ovingscarecrows.org

‘Greening Oving’ is one of the many projects the residents of Oving have taken up, and details can be found on the village website. At present work is also underway to set up a village community garden and a light bulb library.

The parish is served by community wardens and an active Parish ouncil.

With thanks to the Oving Memories Group for all information contained in this article.