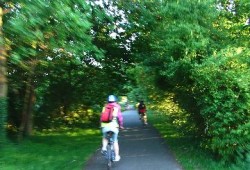 The Manhood Peninsula Partnership has been working to progress ideas about tourism and visitors to the peninsula with the Green Links across the Manhood (GLaM) group, a subgroup of the MPP. The ideas behind GLaM were originally put forward by the Medmerry Stakeholders Advisory Group (MStAG) in response to proposals to create the Medmerry Managed Re-alignment Scheme. These were expanded further in the Destination Management Plan (DMP) produced by Chichester University during the Coastal Change Pathfinder Project. The new project particularly wants to develop the idea of green tourism as a means to encourage sustainable economic development, but not to increase visitor numbers during the summer.

The DMP identified ways to enhance the visitor experience. The main recommendation was to capitalising on the footpaths and green links provided by the Medmerry Managed Re-alignment Scheme. GLaM aims to further this by creating and improving other paths and green routes across the peninsula.

The links, and other measures such a bird watching, will help relieve visitor pressure on the peninsula by providing a reason for people to visit and stay during the autumn and winter months instead of concentrating on summer. Most importantly they will also link the eastern and western sides of the Manhood Peninsula, which currently have good north/south links with Chichester, but very poor east/west links with each other. The intention is to help revitalise the peninsula economy by providing off road links between Medmerry and the two harbours, using them as a catalyst for creating interest in the area.

The Green Tourism and Sustainable Economic Development document provides an overview of green tourism and economic development on the peninsula, and creates the context for the Green Links across the Manhood (GLaM) Key Policy Statement.

Key documents to date are the GLaM Key Policy Statement and the GLaM Map. Please follow the links below to read the documents:

2. GLaM Map – the map shows the location of the proposed and aspirational projects.

Restoring the Record and the Definitive Map

Numerous paths, tracks and lanes of ancient origin exist in this country. In 1949, the National Parks and Access to the Countryside Act established nationwide Definitive Maps of rights of way so people would know for certain where they could or could not legally walk or ride across other people’s land. It was the start of recording rights of... Continue Reading »