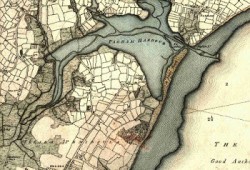 The Manhood Peninsula was a source of marl until the late 18th century, and marl found in Selsey was considered some of the best available. Marl has been defined as a pit from which marl, a mixture of clay and carbonate of lime, is excavated. Marl was commonly used as a fertilizer and marl pits were at one time considered a valuable resource.

Towards the end of the 18th century lime became the preferred option. Lime was a more effective fertilizer, and more readily available as a result of improved transport facilities countrywide. Marl pits were also found to the north of Sidlesham, though these were abandoned on the discovery of pure marl at the foot of the Downs.

Evidence of former marl pits can still be found in local place names such as Marl Pit Lane in Chichester, though many of the actual sites are now hidden by trees and undergrowth. Find out more about marl by reading The Marl Pits of West Sussex by Emma Jeffrey. The study was undertaken as part of the Tithe Maps Project on behalf of West Sussex Record Office.