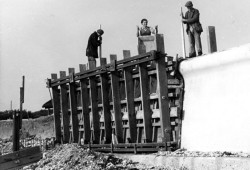 Sea defences have been required in the Manhood Peninsula for many years. A great deal of work was needed following a particularly bad storm in December 1951 which wrecked houses along the Selsey sea front, and led to their subsequent demolition.

Following is a gallery of images courtesy of Royal Haskoning, the Coastal Engineering Consultant for Chichester District, showing the coastline and sea defences evolve as a result of storms. Royal Haskoning have been involved with coastal mangement in this area for many decades, and the gallery of images catch the flavour of 1950's coastal communities as their sea defences are built.

See if you can spot familiar places.

A large part of the Manhood Peninsula is less than 5m above sea level and at risk from flooding, both inland and coastal. It is likely that climate change will increase this risk, through rising sea levels, rising water tables and increased precipitation intensity. Drainage is an increasing problem on the peninsula as the existing ditches are proving inadequate... Read More»

The RSPB's newest nature reserve at Medmerry offers long walks and cycle rides through an amazing new landscape only a stone's throw from Pagham Harbour, with new mudflats, tidal lagoons, saltmarsh, wildlife-friendly farmland, dragonfly-rich ditches and great views and sunsets. Situated on the Manhood Peninsula coast, south of Chichester, this is a ground breaking project and the first of its kind... Read More»