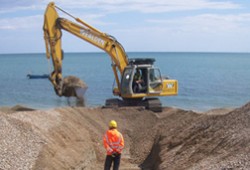 The construction contract to replace the public slipway at East Beach, Selsey was awarded to JT Mackley. Work began on September 12th 2011 and the ramp was completed approximately nine weeks later, a schedule that successfully avoided disruption over the busy summer months.

Following further local consultation the decision was made not to progress with the reinstatement of the ramp for commercial fishermen.