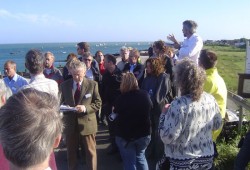 The intial step in exploring ICZM within the Coastal Change Pathfinder Project involved developing a working partnership between residents, employers, coastal users and local government. The objective was to achieve sustainability in the face of climate change and consequent coastal change. The following approaches were pursued:

· An ICZM spatial plan for the Manhood Peninsula. This is a broad-brush approach stating desired approaches to ICZM on the peninsula. It comments on a range of issues as diverse as transport; the environment; employment and prosperity, and tourism.

· ICZM Workshop to examine coastal and land based policies in the area to feed back local experience to Defra about successes and failures in these areas.

One of the primary aims of the Integrated Coastal Zone Management stream of the Pathfinder Project was establishing a working group comprised of MPP members, local businesses, marine user groups, and government bodies including Chichester District Council, the Environment Agency and Natural England. ICZM is concerned with joining up land based and marine based planning, a concept considered for over ten years by the Manhood Peninsula Partnership. The concept of ICZM was originally explored in the “Going Dutch” events followed by the Espace project, and was subsequently pursued by the MPP, providing the Pathfinder ICZM group with the background within which the group could expand their ideas and produce a comprehensive spatial plan for the peninsula.

An ICZM spatial policy was included in the Core Strategy of the emerging Local Plan for the Chichester District. Included are themes applicable to the whole of Chichester District, but compiled into a single document focussed on the Manhood Peninsula emphasising a ‘sense of place’ for the peninsula. The policy went out to consultation with the Local Plan Core Strategy. The draft policy helped the ICZM group with their goal of producing an ICZM spatial plan.

Towards ICZM is the spatial plan suggesting management options of the coastal zone from a number of perspectives. It is similar in principle to a Village Design Statement for the peninsula, and comments on how the coastal zone affects/is affected by life there. Subject themes within the document are based on the Sustainable Community Strategy entitled ‘Chichester, A Very Special Place’. It provides a summary of local opinion and expectation as depicted in Parish Plans, Village Design Statements, Conservation Area Character Appraisals (CACAs), and a number of other documents on which consultation has already taken place including the Pagham- East Head Coastal Defence Strategy and the North Solent Shoreline Management Plan. A workshop discussed many of these issues further.

The ICZM workshop took place on 6th April 2011, and attracted nearly 60 participants. They were divided into a number of themed groups such as Transport and Environment, reflecting the concerns and aspirations for the Manhood Peninsula that were apparent in existing documents such as Going Dutch in 2001. For more details see the following page.

The Towards ICZM Workshop held on 6th April 2011 run by CoastNet, one of the partner organisations on the Chichester Coastal Change Pathfinder Project, was an effective vehicle for exploring issues on the Manhood Peninsula . Approximately 55 people with a variety of backgrounds and interests attended. Among them were representatives from Chichester District Council; local parish councils; local... Continue Reading »

An Integrated Coastal Zone Management plan for the Manhood Peninsula area called 'Towards ICZM on the Manhood Peninsula' was adopted as capable of becoming a material consideration in planning decisions by Chichester District Council at a Full Council meeting on 20th September 2011. 'Towards ICZM' was recognised as an MPP document that reflects the views and aspirations of the community. Please see the link below to... Continue Reading »