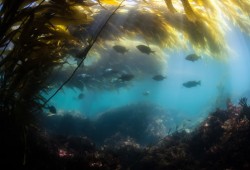 Kelp provides a range of benefits including: the capture of carbon dioxide and the production of oxygen, the support of biodiversity, the support of commercial and non-commercial marine species, cultural heritage and as a harvestable resource. Research indicates that macroalgae are an ecosystem component critical to the delivery of a broad range of ecosystem services, meaning this habitat should be given special attention when considering management.

Historically, kelp was abundant along the West Sussex coastline. But this important habitat has diminished over time, leaving just a few small patches and individual plants, mostly in shallow water and along the shoreline. The Help Our Kelp partnership (Sussex IFCA, Sussex Wildlife Trust, Blue Marine Foundation, Portsmouth University, Big Wave Productions, Marine Conservation Society) want to bring it back through a marine kelp rewilding initiative by Sussex IFCA.

Follow this link to see a short film, narrated by Sir David Attenborough, talking about the value of Sussex kelp forests called Help Our Kelp.

Read more about Sussex IFCA's rewilding project on their website

Our local waters throng with marine life. In Chichester Harbour pontoon pilings and mooring chains are covered in a wealth of colourful seaweeds and animals and reefs of native oysters provide a home for bright red sea squirts, hydroids and sponges. The worms, crustaceans and molluscs that provide food for Harbour birds also sustain a rich food chain below... Read More»

The peninsula contains several internationally important nature conservation areas (see wildlife page). Extensive consultation took place to examine how the environmental character of the Manhood could be enhanced by the Medmerry managed realignment scheme and how it could benefit the local population, through sensitive management of habitat and tourism. The scheme has been sucessfully completed and is now managed... Read More»