Manhood Peninsula Partnership > What's on > RSPB Medmerry « you are here 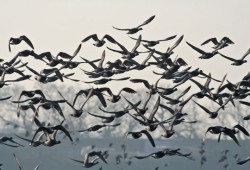 Medmerry is one the RSPB's ‘wild and wonderful’ reserves offering long walks and cycle rides through an amazing landscape of panoramic views and glorious sunsets. The result of one of Europe's largest managed realignment schemes, Medmerry is just a stone's throw from neighbouring Pagham Harbour and linked by public footpaths. This five-minute video tells the story of its creation.
Pay Medmerry a visit in winter and you stand a good chance of seeing birds of prey, wildfowl and waders, and large flocks of linnets and finches. Find out more about Medmerry, including how to get here by following this Medmerry link.

The peninsula contains several internationally important nature conservation areas (see wildlife page). Extensive consultation took place to examine how the environmental character of the Manhood could be enhanced by the Medmerry managed realignment scheme and how it could benefit the local population, through sensitive management of habitat and tourism. The scheme has been sucessfully completed and is now managed... Read More»