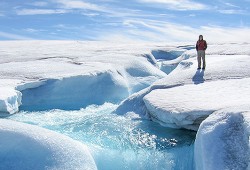 The climate is a complex system and it is changing fast. It can be hard to keep track of what is going on. The Met Office has put together a dashboard which gathers together the key indicators of climate change.

The indicators are based on earth observations made at surface stations, by ships and buoys at sea, from satellites and by observers and research teams around the world. These earth observing networks are crucial for understanding the changing climate.

Follow this link to discover the Met Office Climate Dashboard

The peninsula is particularly vulnerable to the effects of climate change including rising sea levels, rising water table, and more intense precipitation. As a result, the MPP has been working closely with the community to raise levels of awareness and to help produce adaptation plans. These include: practical adaptations funded through a Community Grant Fund including the installation of cycle... Read More»

As the demand for housing increases and land becomes a scarcer commodity, more and more people are embracing alternative ways of living – and that's where this innovative solution comes in. With 71% of the Earth covered in water, these nifty floating homes show that you don't need solid ground to create a truly spectacular place to live. Click or scroll to take... Read More»