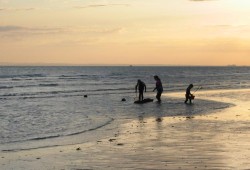 The Marine Management Organisation (MMO) is pleased to announce that the first Three-Year Report on the South Marine Plan was published by Defra on 14 July 2021.

The South Marine Plan was adopted in July 2018. The publication of the Report marks the conclusion of over 12 months of work in gathering data, analysing the findings and reporting on the effectiveness, and effects, of the plan policies, including the wider changes in context. The report also considers the progress made towards achieving the Plan objectives and the High Level Marine Objectives (HLMOs) as set out in the Marine Policy Statement.

The Report identified that whilst the policy landscape has changed since 2018, the Plan remains relevant and broadly aligned with national and local priorities. Positive progress has also been made towards embedding the Plan within the decision-making process. Similarly, the Report shows positive findings regarding the implementation of the Plan, with signs that many of the specific plan policies are having their intended effect.

The MMO and the Department for Environment, Food and Rural Affairs (Defra) are currently considering the future of marine plans. The outcome does not have a bearing on the conclusion of the Report. In the future, it may be relevant to consider the conclusions again, in line with a future scope of marine plan preparation.

The Rt Hon George Eustice MP Secretary of State Department for Environment, Food and Rural Affairs agreed with the MMOs recommendation that the South Plan is to be retained and not amended at this time.

The first Three-Year Report for the South Marine Plan can be found at https://www.gov.uk/government/publications/three-year-technical-report-on-the-south-inshore-and-south-offshore-marine-plan.