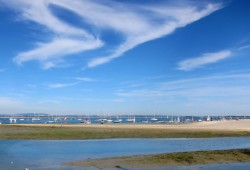 Walks and Talks in Chichester Harbour:

In line with the Government’s roadmap for emerging out of the pandemic lockdown Chichester Harbour Conservancy is pleased to announce that we hope to begin reinstating our events and boat trip programmes from mid-May.

These will include the monthly walks (5 miles or more) and strolls (up to 3 miles).  From now on advance booking will be necessary for all walks and numbers will be limited to enable us to keep to all restrictions still in place at the time.   Bookings for Conservancy events are hosted by Ticketsource and there will be a fee payable on booking which will be £3 per person to join a walk.  The income will go towards covering the costs of the booking service.

The solar boat, Solar Heritage, will begin 1½ hour trips again, hopefully from 22 May.  Numbers will be limited in order to maintain social distancing. See the Conservancy’s website for more details nearer the time.  We are currently working on setting up the sailing schedule and plan to include longer trips with the aim of seeing seals when the tides allow.

The Victorian oyster sailing boat Terror, managed by volunteers from the Friends of Chichester Harbour, will begin two-hour  trips from mid May.

Numbers will be limited initially to four passengers per trip for social distancing rules until 21 June when it is hoped that the full load of six passengers will be allowed.

In the 1980s Philip Couchman, the new AONB Manager and Anne de Potier, Conservation Warden, began a long-term project of tree planting which still happens today. They decided that a tree planting scheme along stretches of the shoreline would enhance the views of the natural landscape of the Harbour from the water and would also help to protect the shoreline from erosion.

This tree planting scheme was begun during the era of partnership working with the Manpower Services Commission whereby unemployed people could gain work experience by helping the Conservancy to deliver projects such as planting trees.  In addition Philip and Anne saw the potential benefit of volunteer support in delivering this project and new volunteer work parties were established. Young bare-root saplings were purchased, along with canes and rabbit guards to help protect them as they settled in.  One big planting strip was completed on the public footpath between Itchenor and Rookwood.  Another one was north of Dell Quay on the shoreline path towards Apuldram.

Philip learnt that decision making in managing the AONB was hampered by the fact that the Conservancy didn’t own the land.  Everything had to be done by consent.  He decided to tune into the farming world so that he could approach the farming landowners with an understanding of what they were having to deal with generally in their work.  Note from Judi – I always wondered why there were copies of ‘Farming Weekly’ in the office back in the 1990s!

These days the regular winter tree planting work parties are led by the Conservancy’s Rangers and supported by members of the Friends of Chichester Harbour who volunteer for these sessions - for more information click here. Tree planting always takes place in the winter months when the saplings are dormant and the birds aren’t nesting.  The variety of species planted include hawthorn, blackthorn, field maple, spindle, guelder rose and native dogwood.

However, all through this past winter no tree planting has taken place due to the pandemic restrictions as we haven’t been able to hold any work parties.  We hope that they can begin again in late autumn this year.

More recently interest has grown in establishing wildflower meadows as these are wonderful for supporting a variety of native flora and are valuable for wildlife too.  The Conservancy has a trial wildflower area at Cobnor Farm working in partnership with the Cobnor Estate.  This was begun in May 2019 and will be monitored and recorded over the years to come.  The value of any natural space for biodiversity will depend on its links to other natural spaces and this connection is very important and are called ‘wildlife corridors’.  We can all help improve the links between natural areas by gardening for wildlife and letting go of the learned behaviour to cut short all the grass in our gardens.  Perfect lawns are essentially eco-deserts, they do not support much in the way of wildlife and biodiversity.

The first agri-environment schemes on farms were brought into being in 1991.  The Conservancy encouraged the Harbour farmers to join in and these days most have had some form of grant for environmental stewardship.  Early supporters were the farmers at Dell Quay and at Cobnor Farm. Anne advised them on what they could apply to do on their land to enhance its environmental value.  Anne also managed Fishbourne Meadows herself in this way for the Conservancy.

Eames Farm on Thorney Island covers 176 acres and has recently been managed to the exacting standards of Higher Level Environmental stewardship.  It was taken over by the Chichester Harbour Trust in 2008, a charity set up in 2002 and dedicated to the protection of the AONB.  The Trust believes that the best way to have control of how land is managed is either try to buy it or negotiate long leases.  These days it controls 250 acres over 13 sites.

Elsewhere in Chichester Harbour during the 1970s the Conservancy worked with Trinity House to trial new-style solar-powered lit navigation marks in the Harbour.    The main navigation markers have lights which have individual lighting sequences emitted in a series of flashes during the hours of darkness.  An example is Fairway at the start of the Itchenor Reach which, as a starboard (green) marker, emits a series of 3 green flashes every 10 seconds.  On the charts this is written as Fl(3) G 10s  These lights used to be powered by gas canisters which had to be stored inside the marker itself.  The rigid floating marker buoys would have little doors, rather like space capsules we’ve seen on tv, and Conservancy technical staff used to have to squeeze themselves in through these little doors in order to reach and replace the canisters.  These days most nautical markers throughout the world are solar powered and the Harbour Staff are able to take more care of their backs!

At 74km2, Chichester Harbour is the largest natural estuary in South East England. It is a living, working landscape, where over 10,000 people live. The Harbour straddles the county boundary between West Sussex and Hampshire, and every year, around 1.5 million people visit, whether to sail the waters or walk the network of footpaths. There are 14 sailing clubs in... Read More»