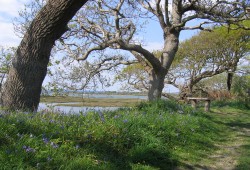 The Manhood Peninsula Partnership has been working to progress ideas about tourism and visitors to the peninsula with the Green Links across the Manhood (GLaM) group, a subgroup of the MPP. The ideas behind GLaM were originally put forward by the Medmerry Stakeholders Advisory Group (MStAG) in response to proposals to create the Medmerry Managed Re-alignment Scheme. These were expanded further in the Read More»

The book for the Sea's the Day project is called Bringing Home the Catch. The book was written by Janet McMeekin whose light, conversational style of writing made her the perfect choice to communicate the stories of the Selsey fishermen. The book used stories from the oral history archive and the author took great pains to speak to each... Read More»

The Manhood Peninsula is a fabulous area for walkers. With its flat and open landscape, wide open skies and stunning views across fields towards the harbour, sea or simply dykes and canal, the area offers bountiful walks for all ages and mobility. Guided walks are regularly organised by both Chichester Harbour Conservancy and Pagham Harbour. www.westsussex.gov.uk - for more information... Read More»